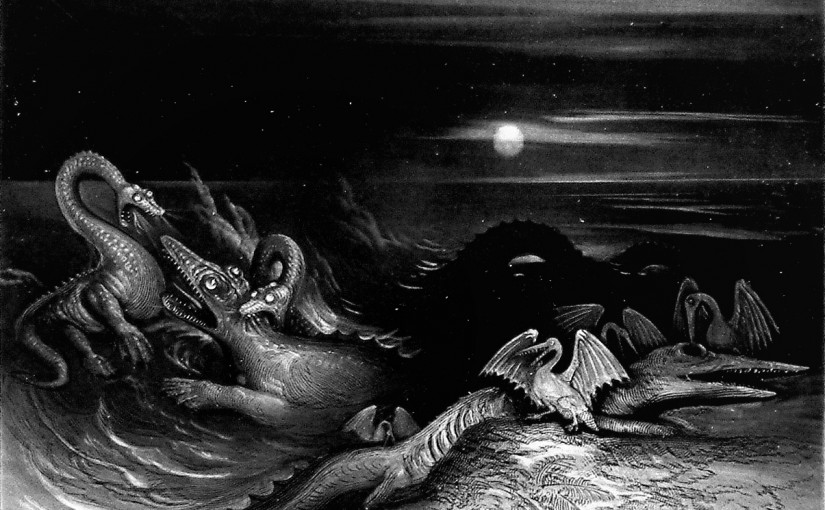 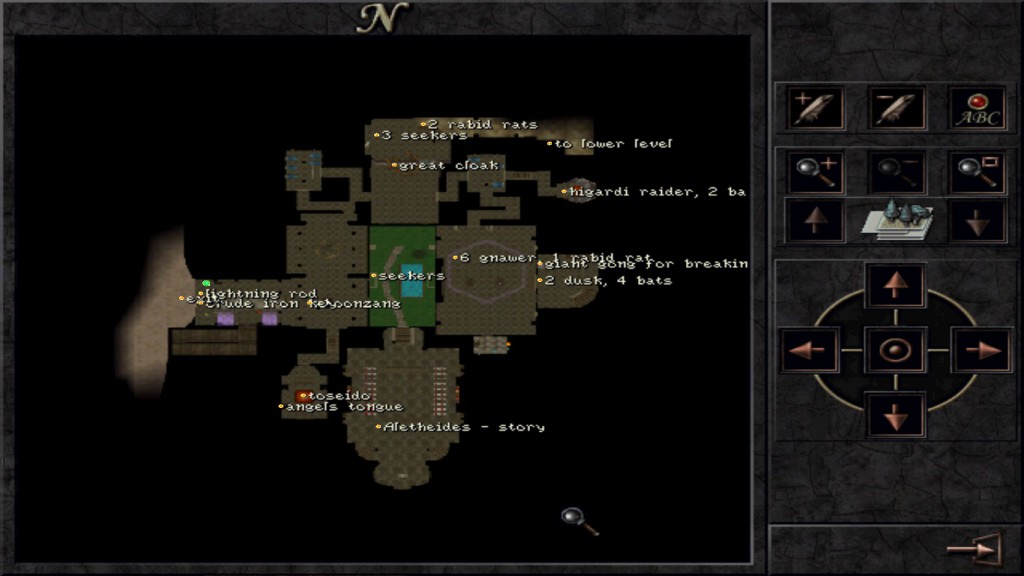 …if I missed something, please tell 🙂 Or if you want something else mentioned too! This guide is based on the monsters I’ve met in the Monastery in my playthroughs – so if you have encountered others, please add! Same goes for the pictures – if you have any missing ones, please contact me 🙂 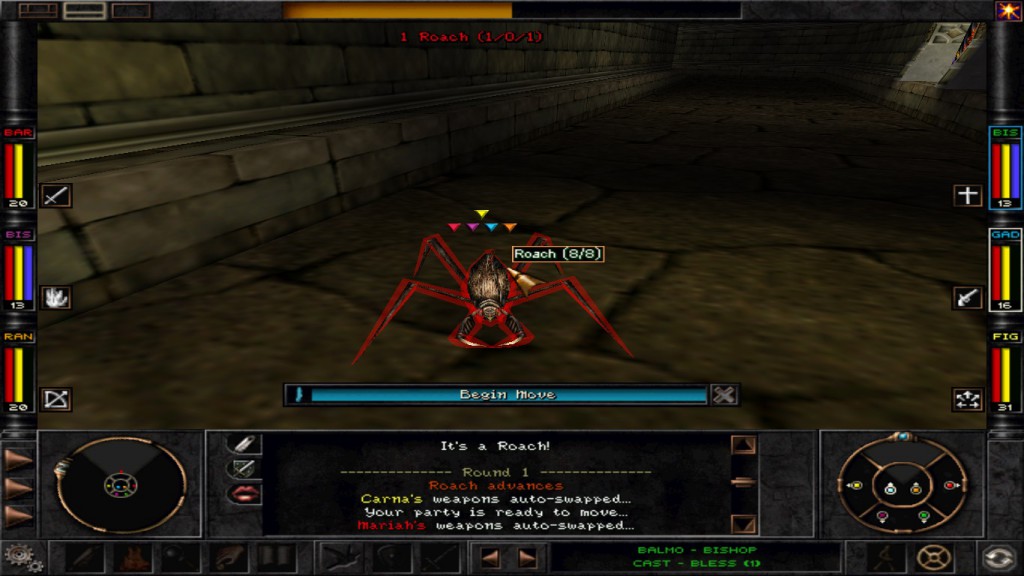 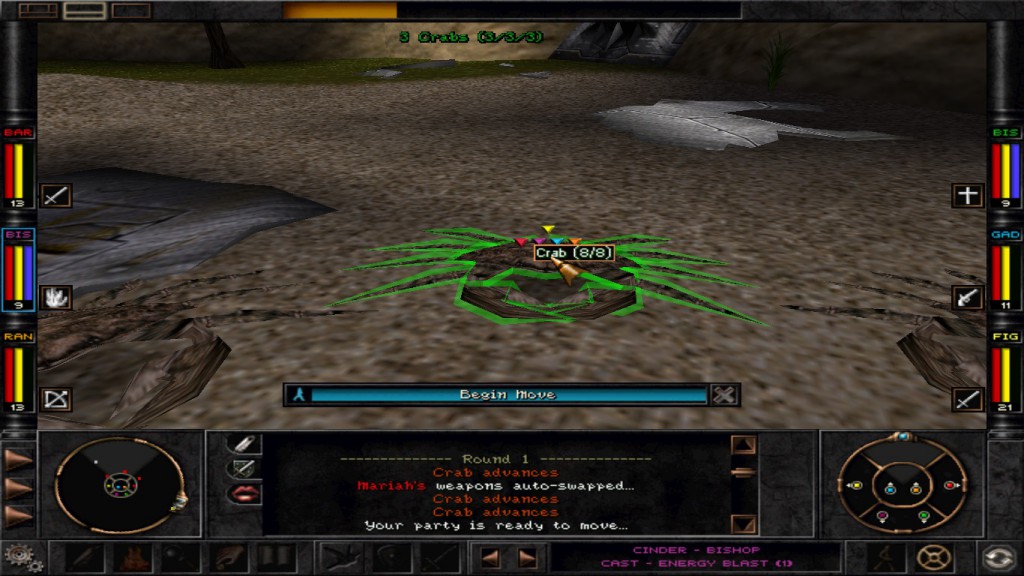 Crab
Some resistance vs water, earth and mental spells, otherwise weak to spells. High single digit hp. Hits single digits. Kill low hp ones first. No problem to get them one by one waiting in a doorframe. 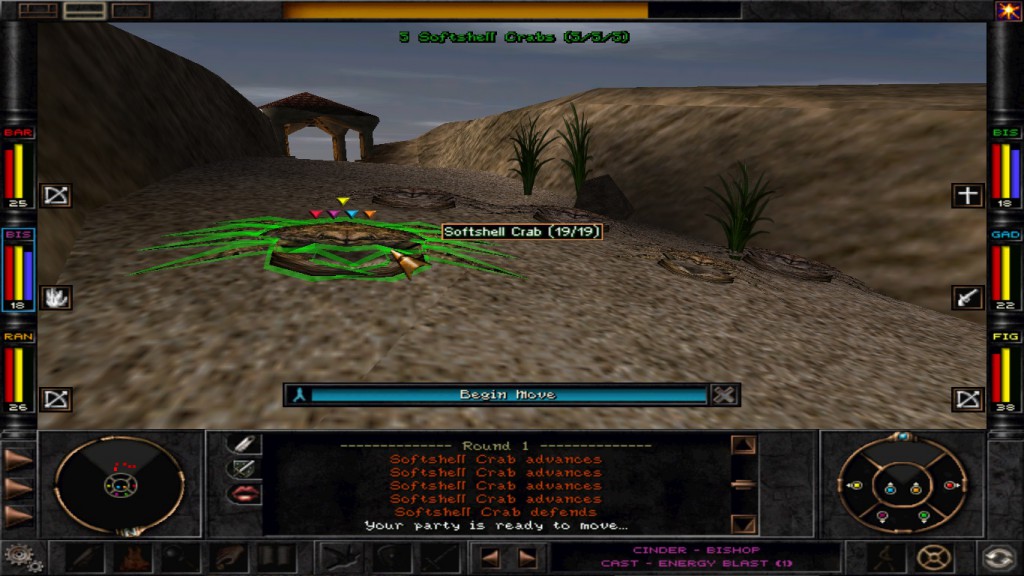 Softshell Crab
Same resistances as Crab, vs water, earth and mental spells, otherwise weak to spells. Low double digit hp. Hits high single digits. Kill low hp ones first. No problem to get them one by one waiting in a doorframe. 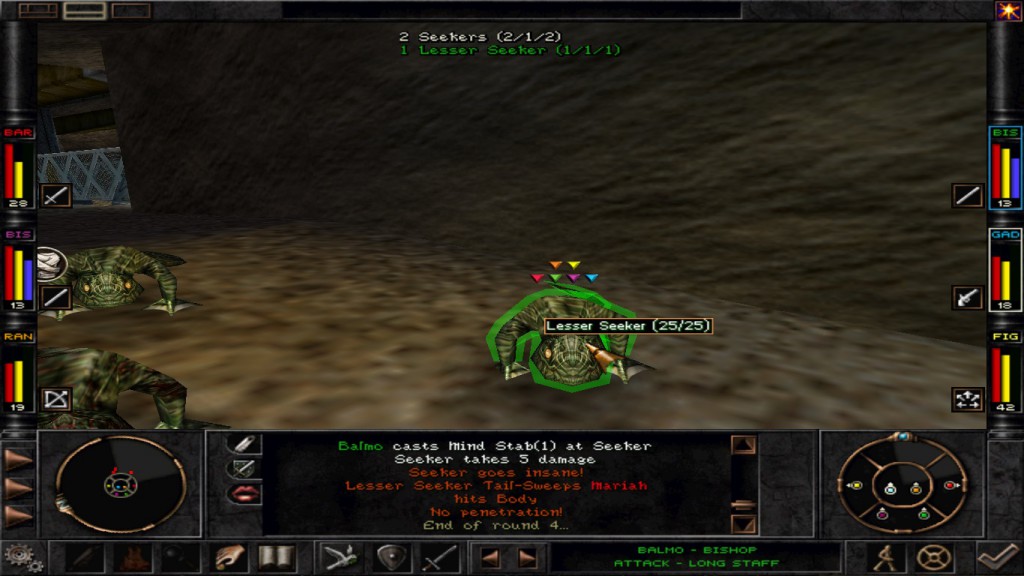 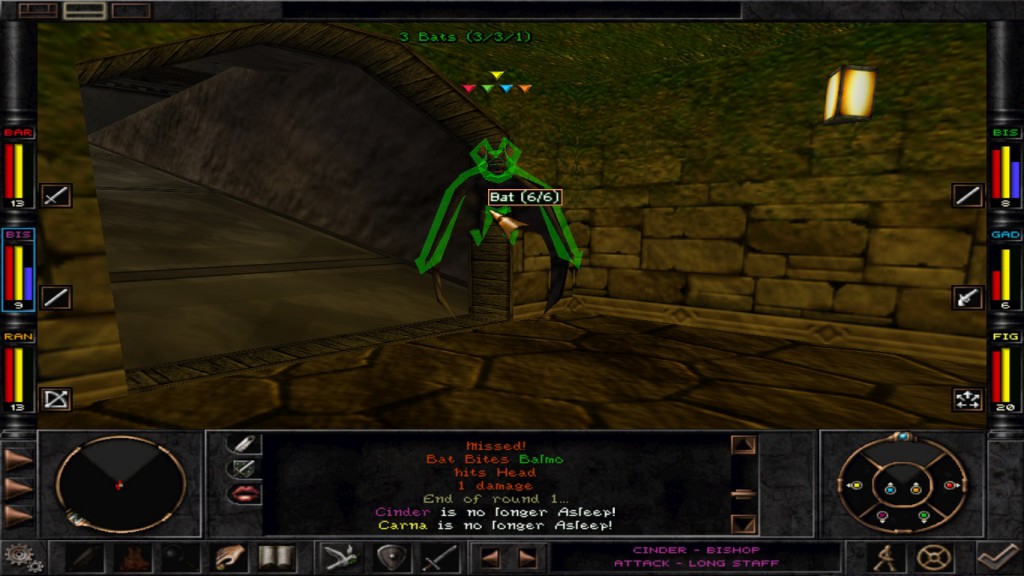 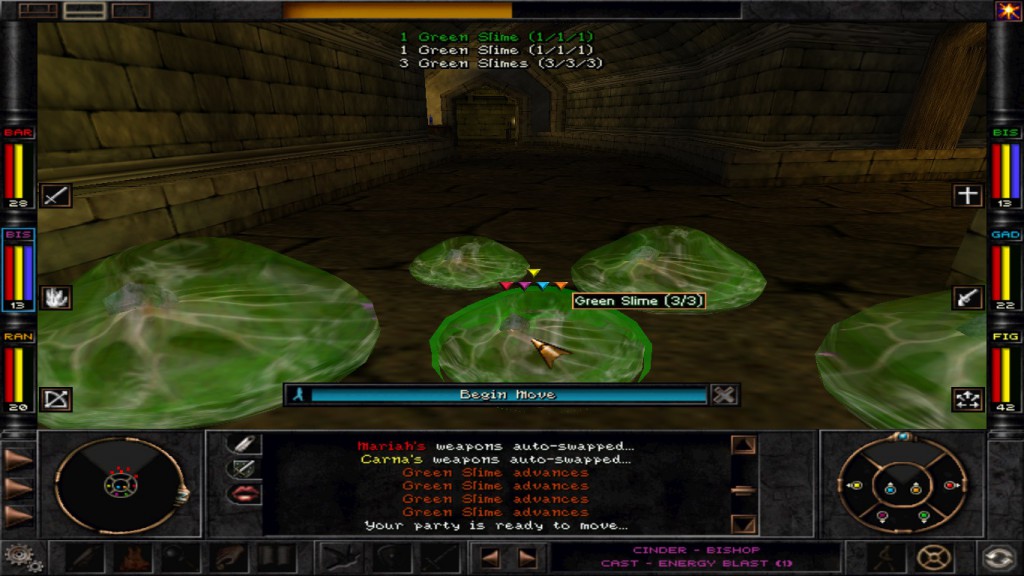 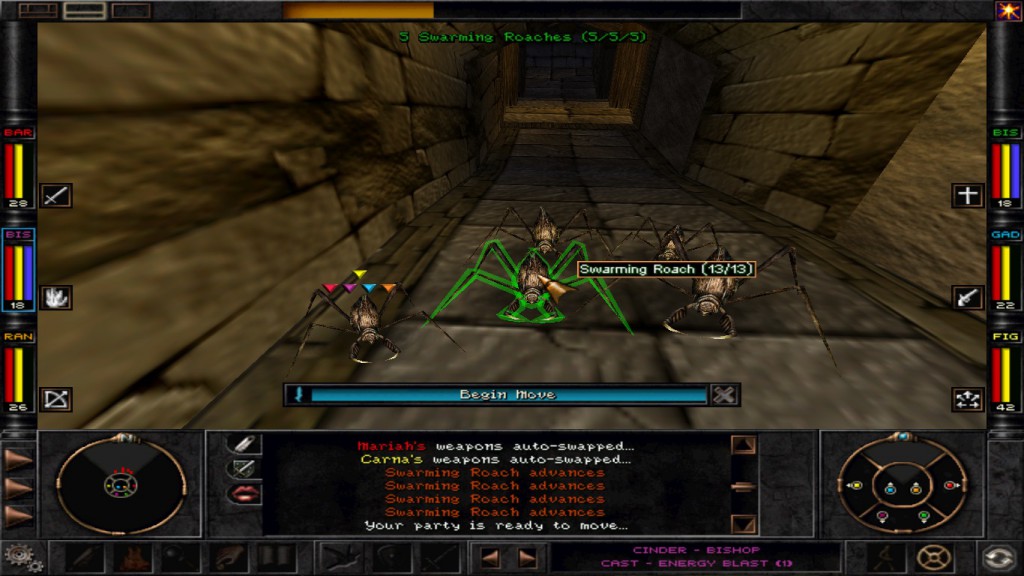 Swarming Roach
Resistant vs Mental Magic, weak to all other forms of magic. Up to low double digit hp. High single digit damage.
May have multiple roaches attacking you even if space is limited – so be careful not to get surrounded by these if they have a high number. Easy to hit and to kill. Area damage wrecks them. 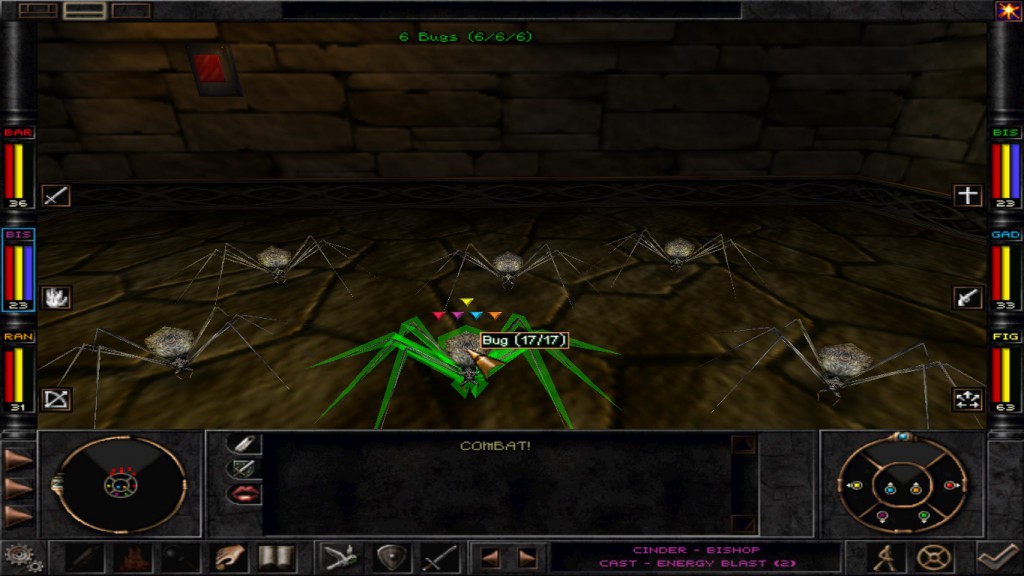 Small Spider
Resistant to mental magic, weak vs other magic. Low double digit hp. Ranged combatants with low damage but a high chance to paralyze your party. Can poison in close combat. If other monsters are present that you cannot kill quickly, try to remove the spiders first.

Wolf Spider
Resistant to mental magic, weak vs other magic. Low double digit hp. Ranged combatants with low damage but a high chance to paralyze your party. Can poison in close combat. If other monsters are present that you cannot kill quickly, try to remove the spiders first. Yes, there is not much difference – Wolf Spiders are higher level and usually have less hp in my experience.

Hardshell Crab
Resistant to Water and Mental Magic, weak vs other magic. about 30-60 hp. Low chance to poison you – high damage up to around 15. Extended Range, so protect your backline! Tough opponents for their level; try to control them quickly by spells like Blinding Flash or even the high level Sleep spell of your Bard’s Poet’s Lute. 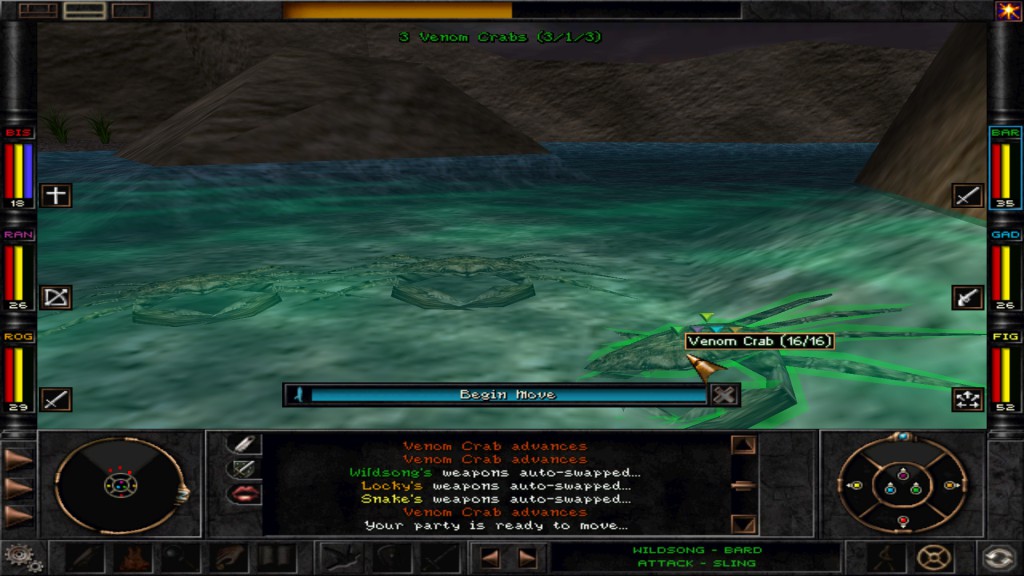 Venom Crab
Resistant to Water, Earth and Mental Magic, weak vs other magic. Around 15 hp. High chance to poison you – poison may collect stacks so try to cure quickly at least after combat. High single digit damage. Easy to kill, so kill them and save your crowd control for other opponents. Collect the Venom Crab Shell they drop for Antone Rapax. 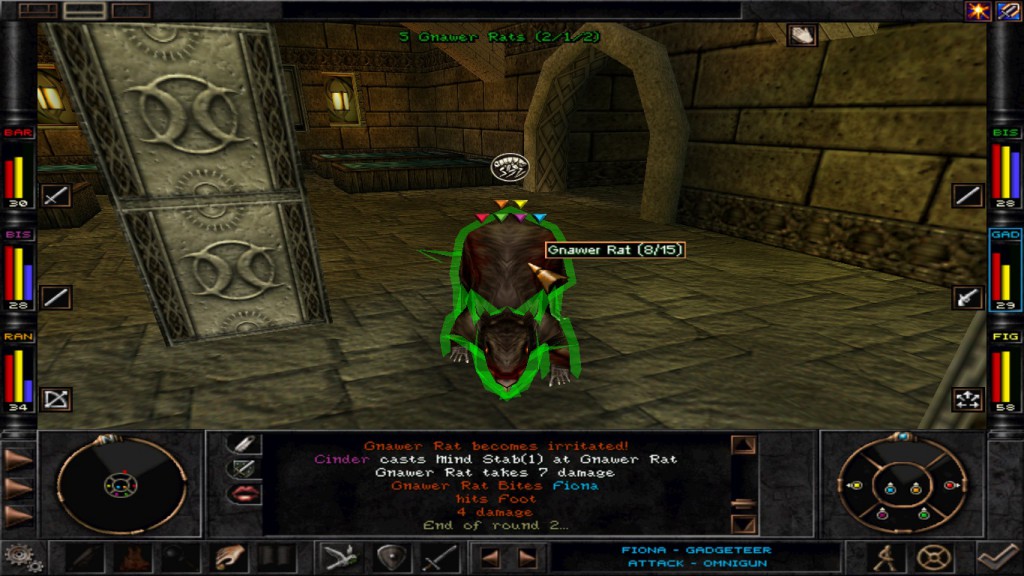 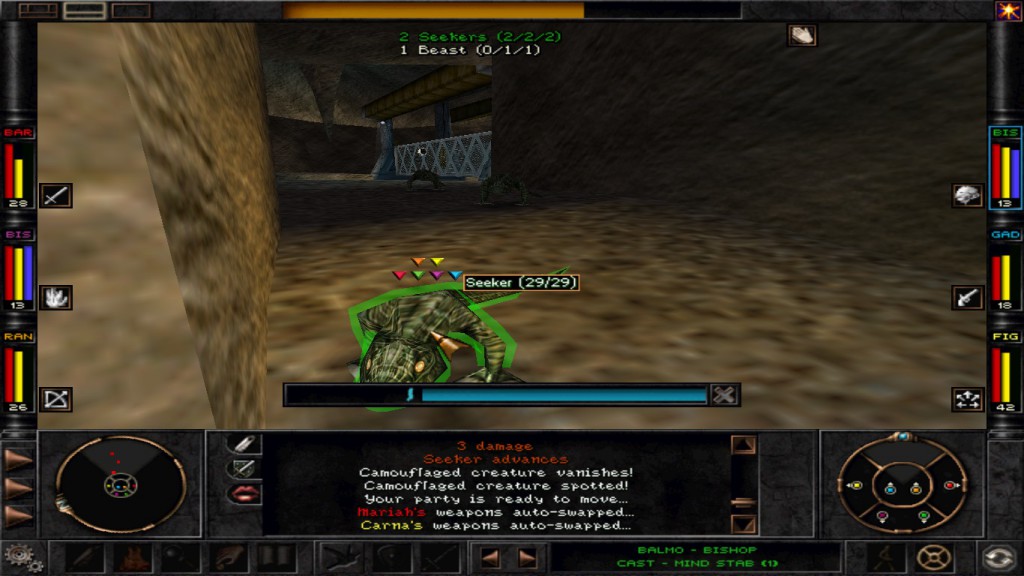 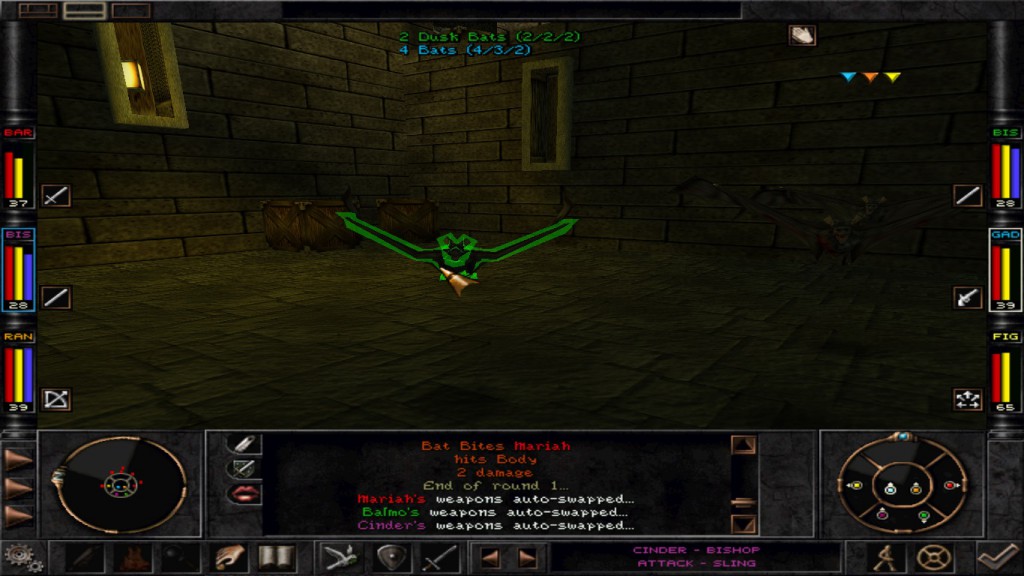 Dusk Bat
Resistant vs Water and Air, weak to Fire. Low double digit hp, high single digit damage. When mixed with normal bats, control them with a mental spell. Dusk Bats are hard to screenshot – this one refused to show her hp :-p 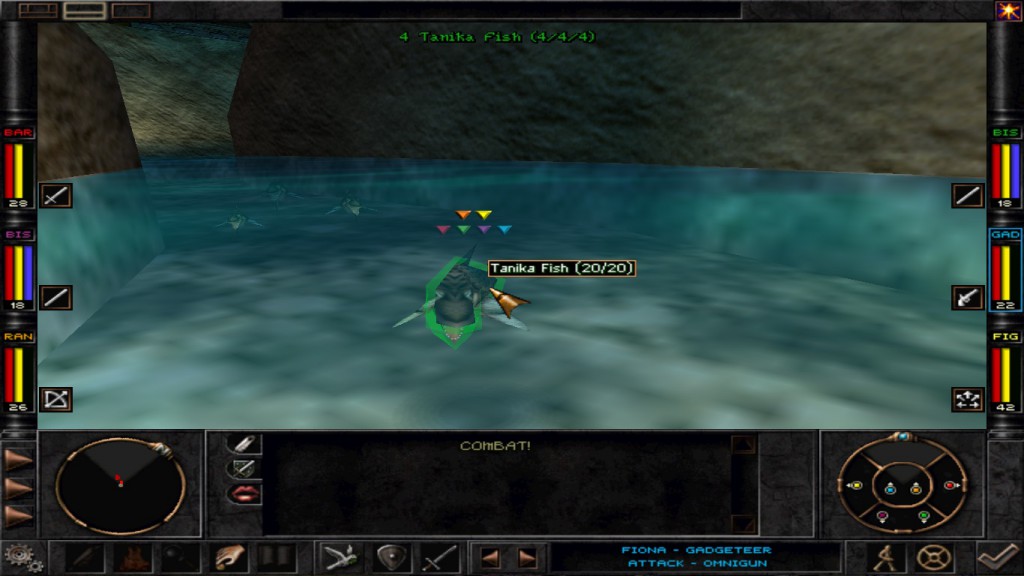 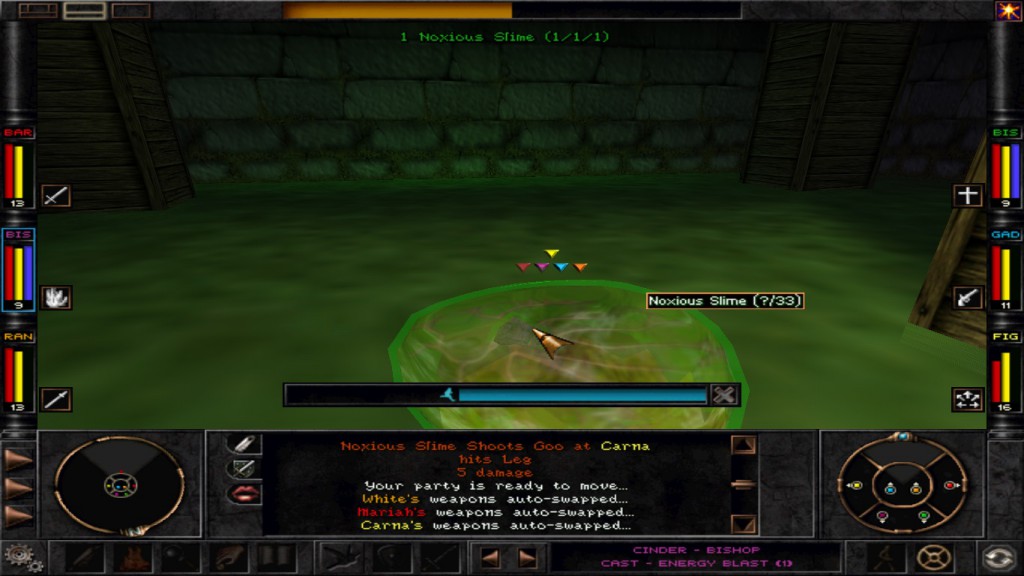 Pustulant Slime
Weakness to Fire, resistant vs Mental Magic. Double digit hp. Melee combatant with high single digit damage and the unnerving ability to cast a nauseating cloud on your party. Eliminate quickly, or will wear you down in a multi-monster encounter. 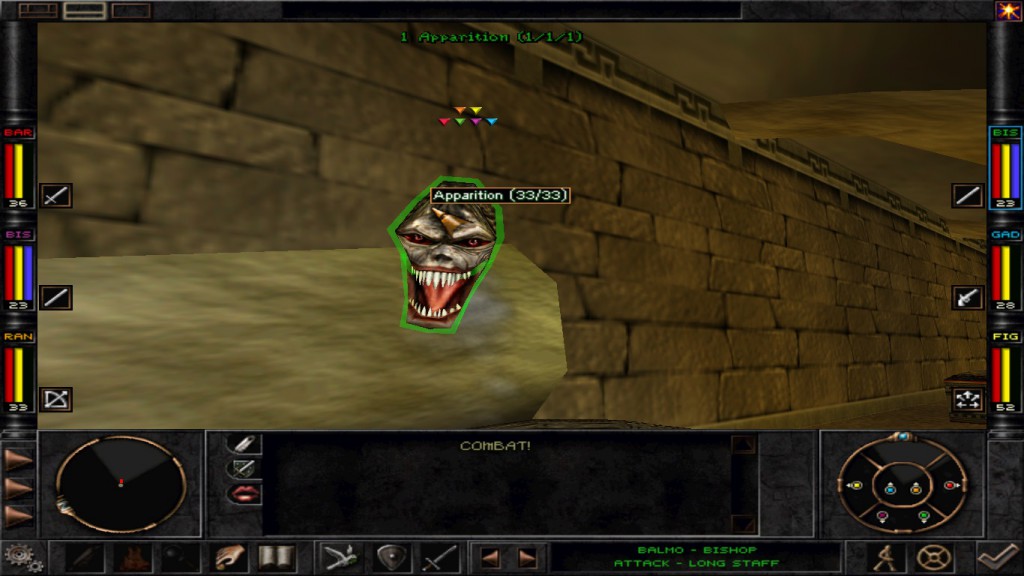 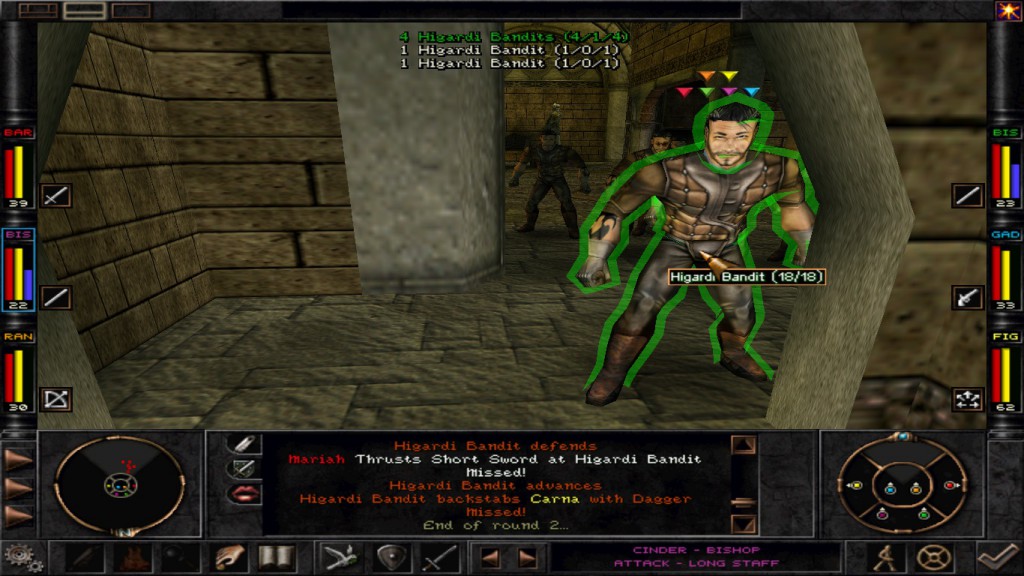 Higardi Bandit
Water/Earth resistant. Good drops. Low double digit hp, good damage in melee and ranged too. Easy to kill but may run around and cause you to lose turns that way. May flee, being a nuisance later. 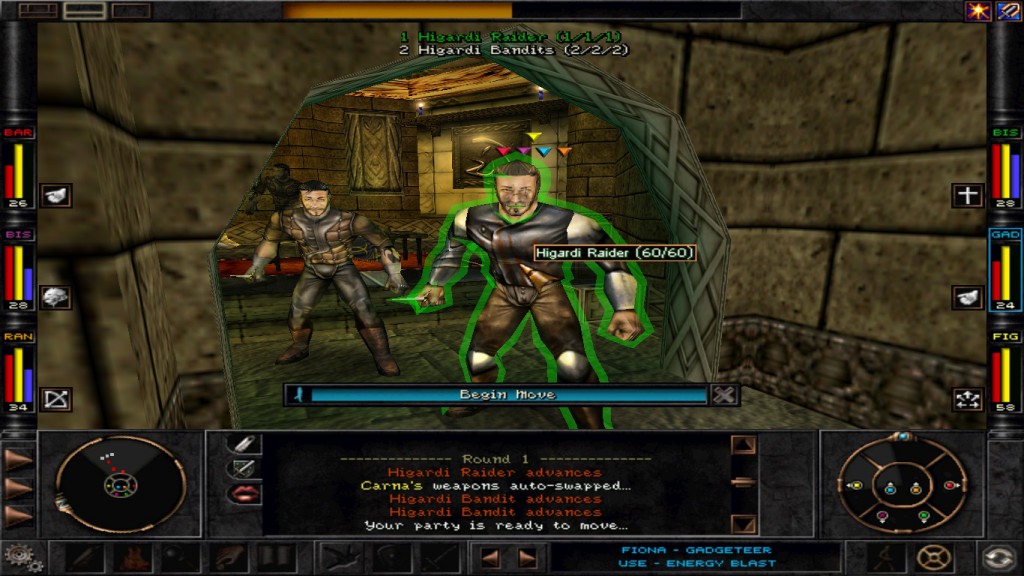 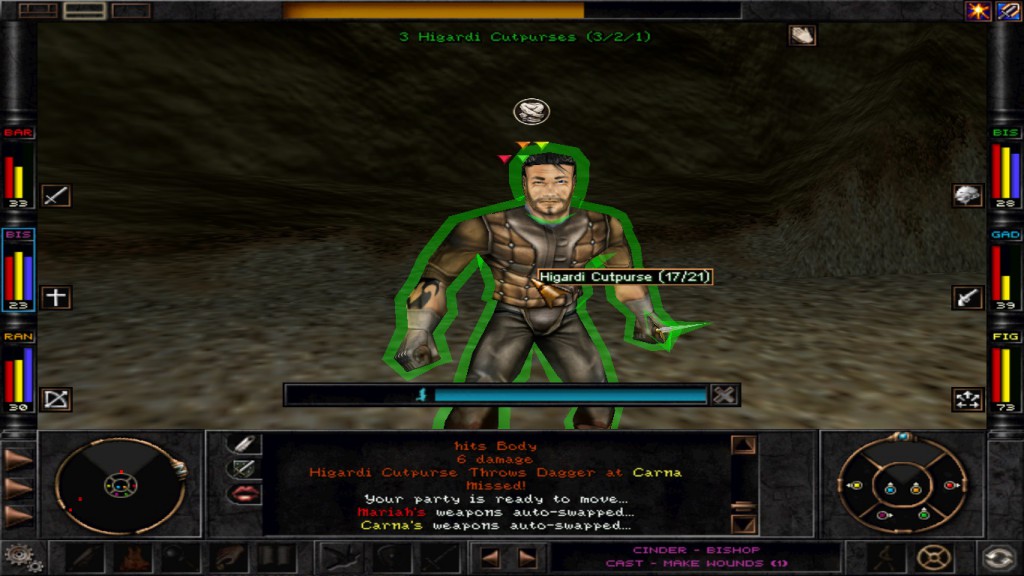 Higardi Cutpurse
Water/Earth resistant. Good drops. Low double digit hp, good damage in melee and ranged too. Very easy to kill, but may run around or flee, being a nuisance later. 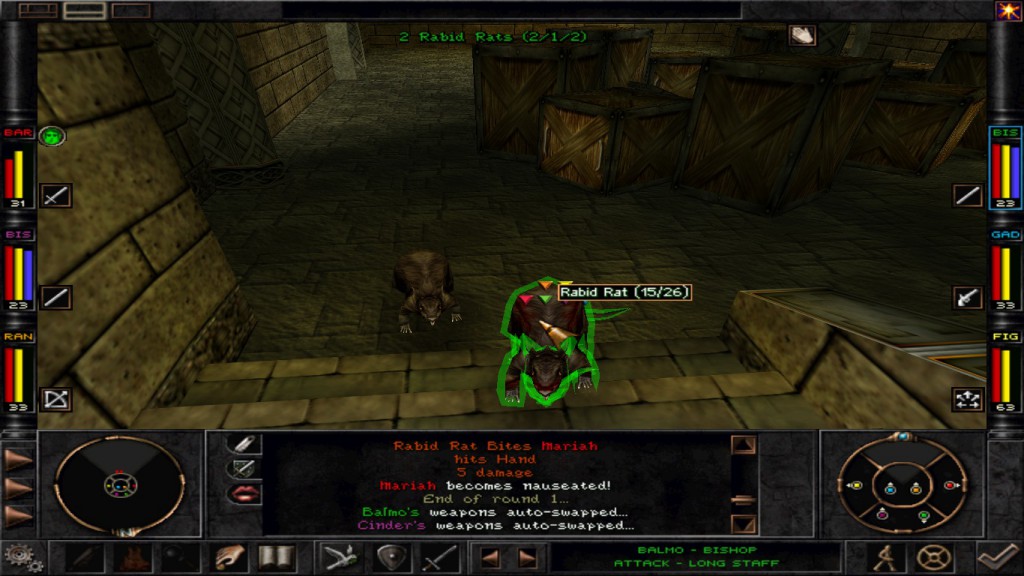 Rabid Rat
Strong resistance vs Water, some vs Mental Spells. Double digit hp. Up to double digit melee damage. High chance to nauseate on attack, some chance to drive insane. If the rats get to surround your characters, they can be a problem. One by one they are easy to deal with.

Metallic Slime
Vulnerable to Fire only. High double digit hp; melee and ranged attacker up to double digits. May cause unconsciousness. Takes only 50% damage from physical sources. If they are too tough for you, you can always run, as they usually don’t do much damage and don’t follow quickly.

Screaming Head
These ones or the Shrieking Heads are waiting for you in the Grave in the Monastery. Vulnerable only to Divine Magic. Double digit hp.
Cast all sorts of spells to control the combat, but not much else. If your party is insane, run around until it wears off or only your low damage party members have it and then hack these things down. If you have Bishops with you, command them to the grave. Dangerous combined with other monsters only. 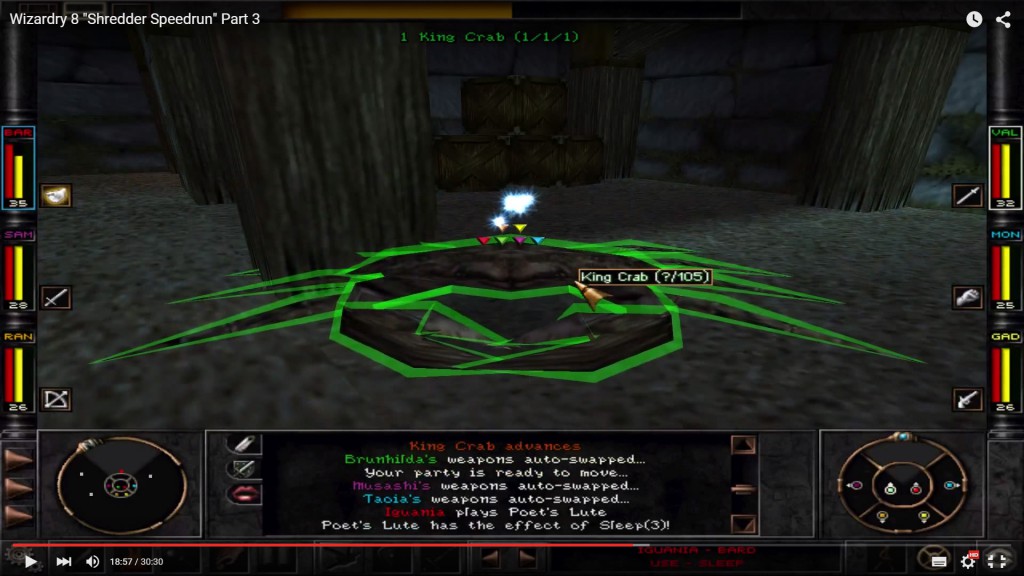 King Crab
Vulnerable to Fire, resistant to Water/Mental. Irritating Skin is a good option against it. Around 100 hp. Extended Range, attacking twice per round with single digit damage usually. An opponent that you have to endure, otherwise not that dangerous. Be careful about your weaklings in the back row: The King Crab can reach / attack them if you go too close! 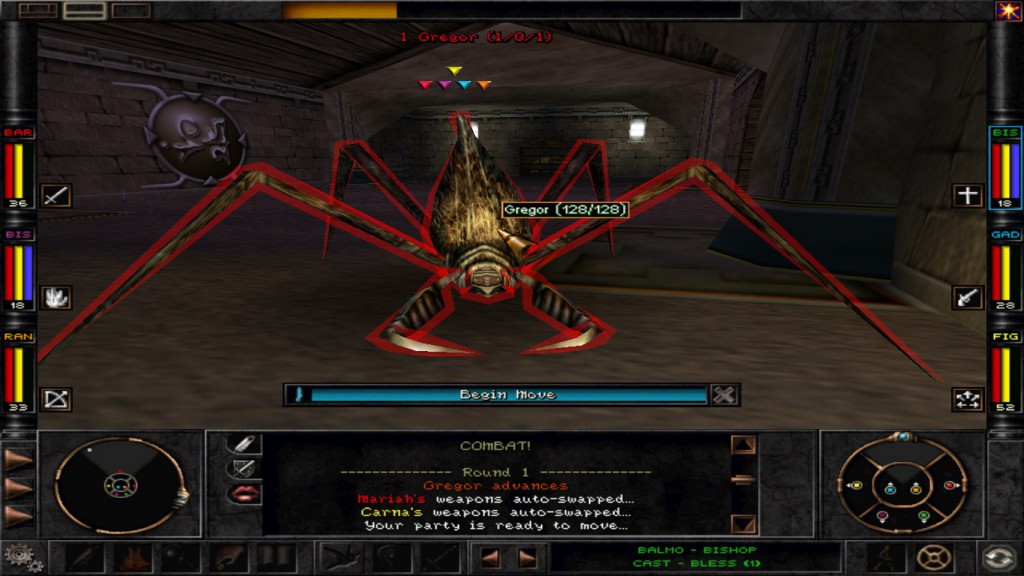 Gregor
Highly Resistant to Water / Mental Spells, somewhat vulnerable to Fire. Irritating Skin may work. Around 120 hp. 3 Attacks with mixed damage, ranged and melee. High chance to paralyze or poison. A really hefty opponent – don’t hold back on him and I’d recommend to use items you collected in this fight too, like a Scroll of Haste, to help speed up the fight.
The longer the fight lasts, the tougher it gets. Don’t be down if one or two of your party members die – this is quite normal, as he can one-round many characters due to the paralyze/melee combo.
If you’re the type to save before tough encounters, you should do that. Even if you’re not, do it anyways, at least if it’s the first time you encounter him. Significantly stronger on higher difficulty levels. One of the toughest fights in the early game.
You can avoid him if you run around like a madman though, and proceed to the next level anyways, as he will go back to his room after a some time running around edges and jumping off cliffs, not pursuing you anymore. 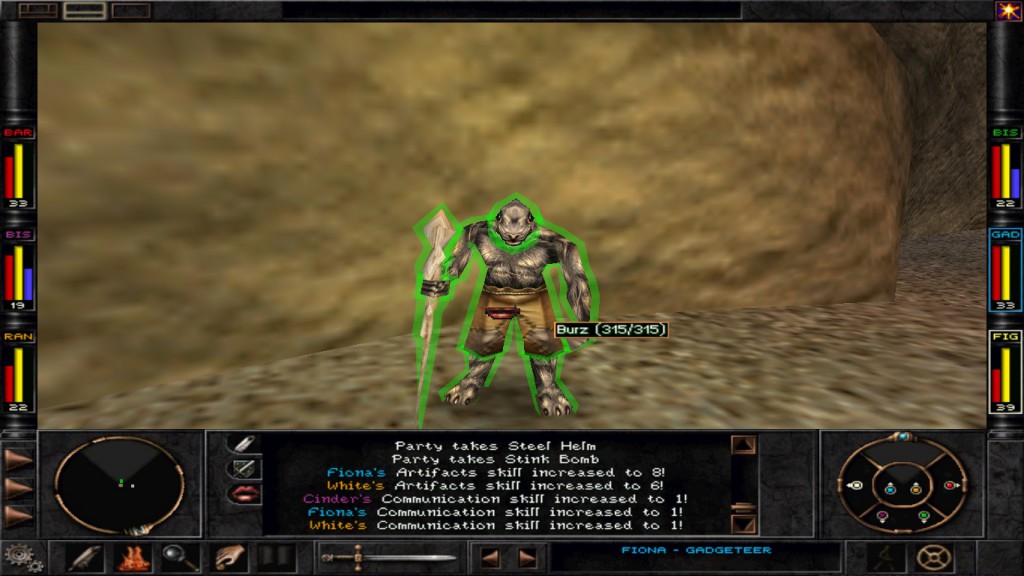 Burz
A nice guy, friendly but greedy. Use to get rid of stuff you don’t need anymore. Great source of ammo or minor upgrades. Also has some resurrection powder. Sometimes has a Longsword or a Short Staff and Daggers: All of these you will need to access the retro dungeons later in the game so you may want to stock up on that stuff as it isn’t sure you’ll get it later and it isn’t expensive at all.
I’d recommend you don’t sell your resurrection powder, as it can be really helpful if you don’t want to reload sometimes and don’t want to save the game like a paranoid madman 🙂