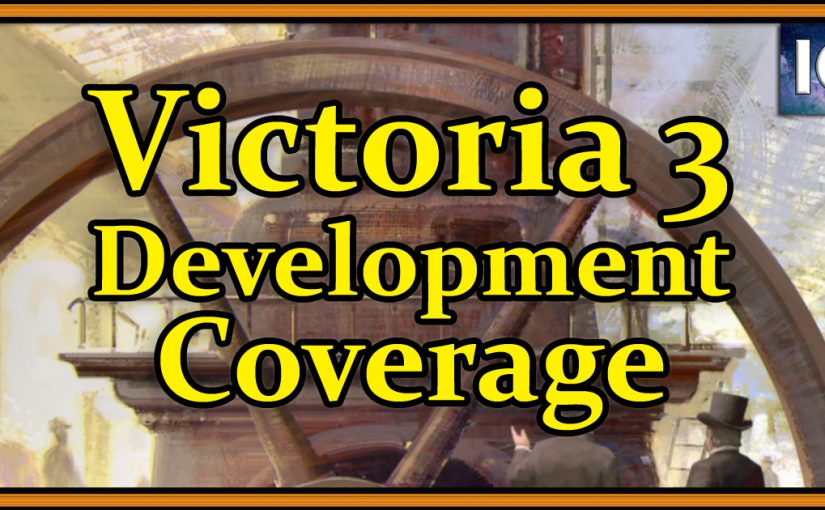 Hey friends, Victoria 3 has just been announced. Here, I will cover its development, documented by the Dev Diaries in Video form with commentary and summaries of them in text form on this blog, from latest to earliest. All the best, Your Immanuel Can

Relations: Will come as a number and in categories for number corridors. For example Neutral, Cordial, Amiable, … or even down to Hostile. The corridor will be from +100 to -100, this represents the relations. Certain corridors, like Cordial for a Non-Aggression Pact, unlock certain relations / actions. The relations are the same for both parties between them. This means if someone wants to have bad relations with you to for example declare war on you, you can stop that by repairing relations diplomatically. Crazy! Also: Infamy, the Bad-Boy rating is back. Infamy will hurt you on the World Stage, decreasing your diplomatic image. Fewer empires, especially Great Powers, will regard you as friendly. And then you might declare your interest in a Strategic Region….

The new order from Great to Minor, from Recognized to Unrecognized Power is a dynamic one. Ranks come from Prestige, but not absolute Prestige. There is also not an absolute number of Ranks for Great Powers and such, rather it’s determined from Prestige and being Recognized or Unrecognized. A lot of prestigious countries will lead to more Great Powers while there could also be only one Great Power if things are going extreme. This, and how you get Prestige or Recognition, in detail here:

Migration is going to be a big driver of population change in the game. It gets triggered by bad state of living and starvation in the pop’s home country, then pops start moving to other states with better job opportunities and standard of living and if possible with no discrimination. There is also the Mass Migration special event that gets triggered by starvation, very low Standard of Living and high Literacy – then, a state is selected where people will migrate to, based on Migration Attraction, Discrimination, logical path to take (e.g. trade routes), laws, jobs etc.. – there are also direct influences like Decrees and Migration Policy. Watch the details here:

Victoria 3’s states are a dynamic AND static system at the same time. State regions have certain characteristics they can inherit to states which are the puzzle parts that form state regions. The characteristics of states will be distributed to states depending on their size. The size of states is dynamic, often influenced by how many governments control different states in a special state region. Furthermore they are incorporated or not incorporated, are capital or market states and might be very important or might even have surprises in them – discoverable resources – learn more about that and click here:

One doesn’t just approach Slavery like any other mechanic. It’s a horrible problem, but it has been part of history, so it will be in the game like any other.. form of employment. A horrible, hellish employment where a human is treated like their are owned by someone or something else. Everything in this Dev Diary is around the Economy and the Political Problems of Slavery. More details here:

Victoria 3 – Political Movements and how they work

Political Movements will be a way to support or try to hinder you to change your country and government. Pops and Interest Groups will target specific elements of your agenda and depending on their support or their opposition it gets easier or harder to push through. You’ll always be supported by loyalists while radicals are a danger to your society and plans. How does it all work out? Watch here in detail:

Victoria 3 – Standard of Living – Living the Life.. or not 😀

Victoria 3’s Standard of Living System: How you give your pops a better Standard of Living. What are the consequences of low or high standards of living? How does the Wealth of Pops influence their standard of living, birth and death rate and loyalty? And of course.. the Economy? Let’s get into it! Watch here:

How does the Treasury work in the absence of.. Lump Sum Gameplay. You can now have all the money that you want to build or buy things for your state – but at a price. The price will either be diminishing your Gold Reserves or will get you into State Debt which will cause interest. There are limits to both Gold Reserves or State Debt though where they will become less effective (Gold Reserves) or dangerous for your state (State Debt). How will this dynamic state economy work? Watch here:

Jobs, Qualifications, Employment: How and why pops accept jobs, how they reach qualifications for jobs, what stops them from having qualifications and what helps them. How they can even become aristocrats (enough wealth and.. not belonging to a discriminated group). What roles literacy, education, wealth and ethnicity play in the whole job system.. fascinating, long read or… video – watch here:

Market Access and its repercussions are a big thing in this Dev Diary: You need to provide enough infrastructure to make your goods flow, otherwise they are stuck locally, leading to lower prices locally but shortages on the National Markets! But how do you get Infrastructure? Sources include geography, buildings and the Railways. Which institutions use it? From industries and people and also state institutions but to which amount? Learn more details here:

What makes a Victorian (National) Market? How does it work and what is its (pricely) result? We learn that the new economy market system will not have stockpiles but instead the market as such acts as a stockpile for everyone by determining a price of supplies by a system of actors on the market that will push sales and demand requests to the market.

Local environments are not as limited by infrastructure whereas National Markets are. For example, if you overproduce one good, it will be proportionally take a bigger part of the Market Access Infrastructure and might hurt the overall access to all goods in the market by proportionally shrinking them and – the total Market Access always in mind – there will be less of everything else in the bucket if you fill your overproduction stones in.

A fascinating system with more advantages than disadvantages and with a lot of dynamics.. limited somewhat by the base price corridor system. Learn more in the video:

Victoria 3 – Institutions and how they will work in the game

Institutions: Which kinds of institutions will be there (schools, health, police, social security etc), how they will influence your state and how they come into existence. From Interest Groups to Laws to Institutions. Their types of effects and just a general outlook into more specifics..

Victoria 3 – Laws, the Structure of the State

Laws, which kinds of laws we will have access to and their implementation. There are Economy Laws, Power Structure Laws and Human Rights laws. For their implementation, you must seek support from Interest Groups and the implementation will lead to approval or disapproval from Interest Groups as a feedback process. How this will be able to form your state and which kinds of freedoms and creative choices we will have in the process is the topic of the Video and the Dev Diary.

The Production Methods in Victoria 3 will vary a lot, the number of options will be limited by technology. Their use will not be a simple upgrade process but a selection that will depend on what your society needs at the current moment. Production methods can increase income but they will also change society:

The Goods system in Victoria 3 features four types of Goods: Staple Goods for the poorer and middle class citizens, Luxury Goods for the well-off citizens, Industrial Goods to produce specialized Goods in Factories and Military Goods to supply your armies. How the system works and if it’s all so clear cut or not we’ll learn in the video:

The Buildings system in Victoria 3 will in general be more hands on and there will be five types of buildings in Victoria 3 – Subsistence Buildings, Urban Centers, Government Administrations, Private Industries and Development Buildings like Railroads and Ports. You will need the right people to work in them – even Railroads – or the buildings will just produce costs. On the other hand you will be able to build and customize everything a little more in the buildings yourself.. watch more here:

Victoria 3 will have a Capacities instead of a Mana System. This means that you will have to provide a constant stream of the following four capacities to avoid negative modifiers and to provide positive modifiers instead: Bureaucracy, Authority, Influence and Money. Bureaucracy is about the organization of the state, Authority covers the control of the state over its subjects, Influence represents the foreign policy power that you can exert diplomatically. Watch more, also the historical background, here:

The lead designer outlines all kinds of data about pops. Pop groups, pop classes, pop workplaces, what kind of data are connected to the pop and why the pops are the foundation of society and economy. A nice look into the coming bottom up scaled economy model. Watch here:

Paradox has released an art document for Victoria 3 and what we can expect in terms of UI and flavor. We take a look at its Victoria glory and look how it shows connectivity and terrain of a now globalized world. Watch here:

We take a look at the Vickynomics document, outlining everything in the Victoria 3 economy game mechanics. It seems a bottom up mechanic, based on population units, driven by their needs, and the needs of the government, influenced by infrastructure, trade, economic and political power and much more. We take a detailed look and connect it with real world history. Watch this:

The four pillars Victoria 3 will be based upon, making the game more accessible and giving it more character. A nice early insight by Wiz / Martin Anward. Have a closer look and watch here: