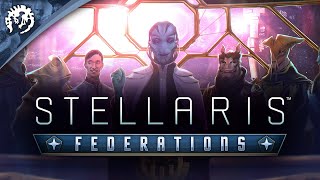 An overview about the Stellaris Federations and 2.6 Verne Patch and an outlook towards Stellaris development in 2020. (From latest to earliest).

Learn more about the upcoming new features, mechanics and giant ships and how they will affect the game!

The Complete Stellaris 2020 Outlook: Federations DLC, Patch 2.6 and Beyond

A summary of all Development Diaries and Videos, and an outlook using the official roadmap for 2020 and Stellaris, garnered with tons of screenshots. You can have it all here:

With the Federations DLC you will also get access to projects for your fleet, and supporting your fleet, on a much larger scale. The Juggernaut can be as much as a mobile station, and the Mega Shipyard just increases the ship production of your empire by a huge amount:

This goes deeper into the opportunities for interaction in the 2.6 Stellaris patch. The Galactic Council, again, and Diplomatic Power as a new measurement of power that will also give you Diplomatic Weight to influence the Galactic Community and your Federation:

You might be familiar with the concept of starting civics for special cases and governments – they will not leave you throughout the game, like syncretic evolution. These, and a lot of other civics, have been transformed to starting civics: Anyone with any government will be able to take them.
And of course there will also be new ones, based on the DLCs your own, and a handful of free ones that will come with the base version of the game.
More in the video:

The whole system around Federations will be reworked. There will not only be the possibility of Federations; also, around the galaxy, the so called Galactic Council will be roughly what the UN are in Civilization: Creating the laws of the galaxy; binding for all who stay in the Galactic Community (this is voluntary – you can leave it).
Some types of empires won’t be in the Galactic Community, or unable to join Federations.
There will be different types of Federations, e.g. Research-, Trade- or War-based.
More in the videos:

From flat modifiers to percentage-based mechanics and how it will influence Hive Minds, Machine Empires and tall / wide strategies.