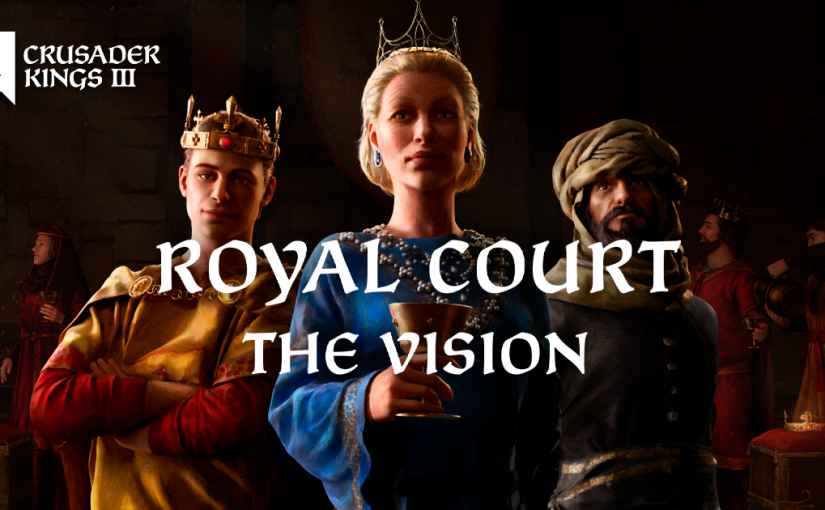 Showing off how they recorded the Audio and Music for the new Royal Court DLC with a teaser, a Cue Song with fanfares to show off the new music at the end of the video. Watch here:

There is a new and bigger format for the New Court Events that will include a court scene and a rather detailed description as well as hyperlinked characters. Let’s also have a look at 8 new events presented in the Dev Diary. Watch here:

What will your vassals do for you? Or what will you be able to do as a vassal? Patch 1.5 and the Royal Court DLC will spice your life up there with two new actions: Petition Your Liege to give you something or help your with something or Pay Homage to Your Liege which is a pledge of loyalty which can be done once for every liege. A very, very important action to get started with your new ruler.. you better bring gifts! More details.. watch here:

Illustrious new positions like Court Gardener, Seneschal, Bodyguard, Food Taster and regionals like Keeper of the Swan.. and more will be added to Crusader Kings 3 with the Royal Court DLC. Find out what they can do for you in the video, watch now:

We learn about lots of events you will have with the repeatable Hold Court decision, one of the hallmarks of the new DLC. Over 100 events will be there for our entertainment and to lead the realm well that will include characters from your realm and their worries, land claims, relatives and so on. Also you’ll see events concerning artifacts, peasants, holyness and much more that will sometimes need some of your attributes to help you decide or help you make successful decisions. Lots of fun is waiting for us. Learn more here with many examples – watch now:

In this, we learn about the actual use of the artifacts for you. How can they support you? In combat tactics, combat prowess, gaining prestige, piety and making friends, in saving money and even getting better knights, unique artifacts will support you and your grand court. But is there an equipment limit to them and how does that apply to your court? We’ll take a deeper look – watch here:

A beautiful show of artifacts that we’ll be able to show in our throneroom: From holy relics to books, from chests to statues, from tapestry to heraldry – and how it was designed. Watch here:

We learn the main wait how to get artifacts now: Inspired guests to your court. They need shelter and money and they’ll start creating an artifact for you, depending on their skill either a.. for example… book from learning, a weapon from prowess and martial.. etc. It’s not the only way to get artifacts but the main one, also to make guests more relevant. And the more Grandeur you’ll have, the more you’ll get these inspired guests – click here to watch more:

Writing about the in-depth flesh of history, we get an introduction into some of the new people and Cultures while changes to the actual historical maps are announced. The Carantanian Culture is a rather not so well known Alpine Slav Culture from around 1000 AD, while Hindustani is now understood as a hybrid of two original cultures that will be added to the game… learn more here:

Paradox put out a couple of teasers for the upcoming DLC and free content with Patch 1.5.